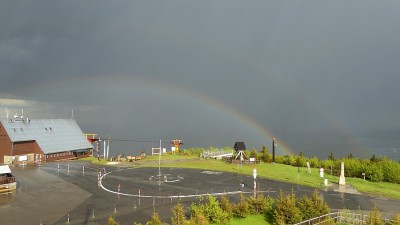 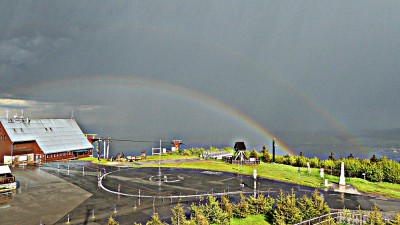 Normally the twinned bow is visible in primary. Is there any known cases, that twinning would be seen on secondary bow...? If it is not theoretically possible, what is reason. At least that bow has less intensity...
http://timokuhmonen.smugmug.com/
http://tiku-astro.blogspot.com/
Nach oben

as I know the twinning of the secondary bow arises at the part below the horizion. So normally it's hard to observe.
I don't know if there's any observation of that.

you are right, there are no confirmed cases of twinned secondary rainbow observations (yet). Theoretical predictions depend on the chosen drop shape model. Most commonly a spheroid is used, with mirror symmetry between the upper and lower part (like the shape of a medical pill, but not distorted that much). Then indeed the secondary will not be influenced much by the drop distortions, and it will not split up. This is a widespread view among theorists.

However, if one takes into account that for falling raindrops the lower part is more flattened than the upper one (like a hamburger bun), there is a considerable shift of the secondary, and it could become visible in the form of twinning (even though the secondary is broader). But it turns out that for sun elevations between 0°...51° (when there is some part of the secondary above the horizon) the shift is near zero for this super-horizon arc. As Kevin writes, there is more to expect from the parts below the horizon, which are usually hidden. I believe that some day in the near future we will be shown some successful photographs taken with quadcopters, or from mountains or airplanes.

The problem is that it is hard to advertise the more natural model for raindrop shapes, as both models predict that the usually visible part does not split up, which is confirmed by observations. Therefore many people stick to the old spheroid view that the secondary never splits up.